Hospet, the famous historical spot, is located on the banks of Tungabhadra River and falls under the distrcit of Bellary in Karnataka. The city is highly popular being one half of the famous twin city of Hampi-Hospet. Hampi, as we all know is a World Heritage Site, with historical ruins from the Vijayanagar empire, some of which can even be spotted in Hospet. It is that one city which is sure to entice the likes of historians and history lovers and is well connected to other important cities in India, Bangalore being the nearest major one. Let's know more about this magnificent city. 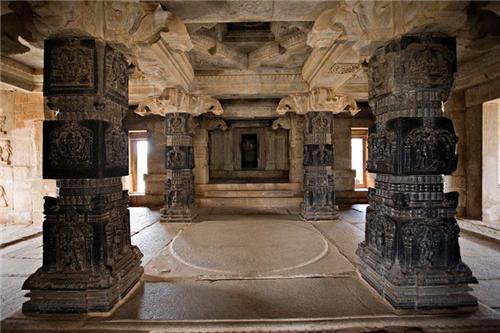 Hospet - Past and Present

This city, part of the original Vijayanagar area, is famous for its historical and mythical importance. The city is said to have been built by Krishna Deva Raya, one of  the rulers of Vijayanagar, in memory of his mother Nagalambika. He built this city in 1520 AD and called it Nagalapura. However, people referred to the city as 'Hosa Pete' meaning 'New City' which was later changed to 'Hospet'. However, a particular area between Hampi and Hospet is called Nagalapura till today. Hospet was the ancient entrance to Vijayanagar for all travelers coming from Goa and the West Coast. Hospet was vitally involved in the history of Karnataka and this has been proved by the historians' excavation findings.

Present day Hospet is a highly developing city in the educational as well as industrial sectors. The development of the city is also due to the rapid industrialization seen here. There are about 2974 industrial segments in the city providing employment to about 15,000 people. Among the growing businesses in the city, iron-ore mining is the one reaping the maximum profits.

Art and Culture of Hospet

Due to its proximity to Hampi, Hospet too shares a similar culture. Arts, crafts and literature are very popular in Hospet and people give great importance to arts and culture. Therefore, life here is very active and fast-paced. There are few similarities drawn from the Marathi culture as well, in terms of architecture, music and way of living. 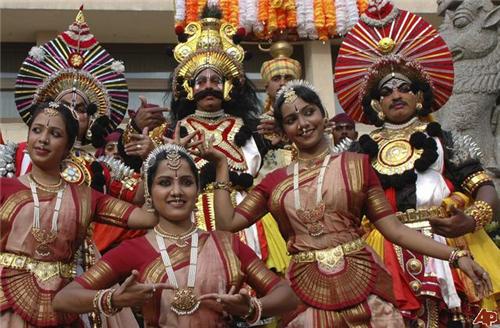 Hospet is a cosmopolitan, with the population comprising of Muslims, Marwaris and Gujaratis as well. Therefore, the great culture of Hospet is evidently a mixture of these different cultures. The ancient art and architecture makes the city an embodiment of beauty. From the historical attraction Hampi to the culturally grand temples, Hospet has plenty of reasons to be a big cultural attraction.

In Hospet, arts and crafts are an essential part of the syllabus of most educational institutions. Many institutions also conduct seminars for students. They bring design artisans from Hampi to conduct the seminars. This is done in order to instill innovative spirit in the students. The people of Hospet also enjoy music and dance in their leisure. They train their children on the same, as extra-curricular activities. For this purpose, there are many institutes which teach music or dance or both.

Religious and Tourist Places in Hospet

Some of the major tourist spots, which should be visited are;

Anantasayanagudi: Built by Krishnadeva Raya in memory of his deceased son, according to historians. It is said that he also built a temple there and allotted certain villages and ordained priests to take care of the temple. The temple bears a splendid architecture and consists of a mahamandapa, sabhamandapa and a rectangular garbhagriha.

Chitradurga: Also known as Kallina Kote and the 'Palace of Stone'. The fort consists of seven big walls with gates each. There are nineteen temples in the fort and the most popular one is the Hidimbeshwara temple. It is said that the fort never lacked water because of its interconnecting tanks which were also used to harvest rain water.

Tungabhadra Dam: Built by Dr. Thirumalai Iyengar, an engineer from Chennai, is one of the major attractions of Hospet. This reservoir is set up across the Tungabhadra river and fulfills multiple purposes. The rain water gets filled in the dam and is sent from there to the canals. This dam is useful to provide electricity, prevent floods and also to irrigate the land.

King’s Balance: In ancient times, there was the practice of using a five-meter tall balance to weigh the king against precious metals and food that were distributed to Brahmins. This important historic site is named after this ancient tradition carried out during ceremonial and festive days. The three loops on top of the balance and a carving of the King are the greatest attractions.

Virupaksha Temple: A World Heritage Site listed by the UNESCO, is a significant shrine at Hampi. Historical research has revealed several 8th and 9th century carvings in the temple. Therefore, this temple is said to have been built in the 7th century. During the Chalukyan and Hoysala period, there were many enhancements to the temple. The historic structure was built in an elevated way of fifty metres from the ground. Another famous feature of the temple are the fifty-six musical pillars that produce sound when struck. This temple began to be built in 1513 but was destroyed in 1565 before its completion.

Raghunath Temple: Is a major tourist location, mainly due to its historic significance. The most noticeable components of the temple are the whitewashed pillars at the middle of the temple. There is also a colonnade just before the compound. 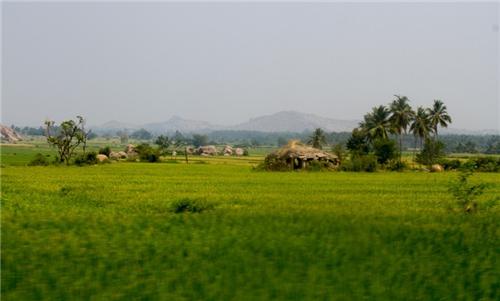 Hospet city in Raichur, Karnataka state is situated at the geographical position of 15° 16' 0" North and 76° 24' 0" East. The climate is tropical and semi-arid with summer from March-May, monsoon from June - August and winter from November-February. The city enjoys favorable weather from July to February. The city has hot and dry summers whereas the winters are cold with the temperature sometimes dropping down to 15oCelsius.

Festivals are good examples of the culture of a place. As a part of their traditional culture, the people of Hospet celebrate different festivals. Following are the major festivals celebrated in Hampi; 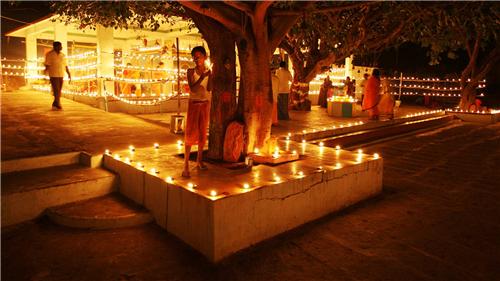 Purandaradasa Aradhana
Purandaradasar Aradhana is celebrated every year in January/February. This festival is observed on the birthday of the famous ancient poet Purandaradasa. In remembrance of the poet, many vocal music competitions, mini concerts and an evening music concert are held. The competitions are held before the event and prizes are awarded on the day of the festival.

Diwali
Diwali, the festival of lights, is celebrated in the regular enthusiastic way. A great deal of colourful firecrackers are burst on this festival. People also visit the famous Virupaksha temple on this day.

Hospet is a popular tourist destination because of its proximity to Hampi. Hampi is famous for its historical heritage and has the pride of being listed as a World Heritage Site. Some of the cultural and historical remains of the Vijaynagar era are still present in Hospet too because it was once an important center in the empire. As per the historians, a notable Portuguese traveler, Paes praised the Vijaynagar empire and compared its marvel with that of the Roman Empire.

People from across the world flock to Hospet to visit the historical ruins depicting splendind art and architecture. Hospet also has other interesting places for tourists to visit. The Lotus Mahal, the Tungabhadra Dam, the Royal Palace and the Fish Aquarium are some of the famous tourist attractions. There is also a wide variety of wildlife to be observed in Hospet. Chakra Vana, Nandanavana park and Shri Ramulu park are some the greatest wildlife spots. Daroji Bear Sanctuary near Bellary is considered by tourists as the best wildlife santuary near Hospet. 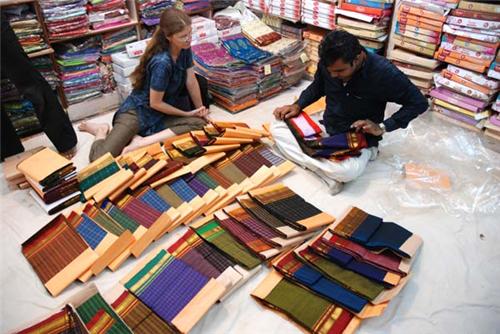 The different shopping products available in Hospet symbolizes it's ancient days. Hand-crafted items such as beads, pendants, screens, carved tables and caskets are the most popular among tourists. Perfumed items such as sandalwood sculptures, sandalwood panels, perfumes and incense sticks are also bought with delight by tourists. Those who are fascinated by jewellery love to shop for Bijapur and Lambani Jewellery.

Shopping for apparel is also extremely famous in Hospet. Bijapur sarees are very popular here. Those who are passionate about local historical artifacts will find Hospet a paradise. Handlooms like those from Guledgudda and Bijapur are popular too. Some of the famous handloom shops here are Andhra Handloom House, Karnataka Handlooms and Tamil Nadu Cooptex. The shopping malls here are other great sources of entertainment for the people of Hospet as well as tourists.

Since Hospet is an important tourist destination, it is well connected to other parts of the world. It does not have an airport but it has a well-built railway station. The transport facilities make it easier for tourists to get around the city, despite the crowd. To prevent difficulty in transport, Hospet has various modes of transportation. It has well connected roads to many major cities. It also has well-linked railway lines to Bangalore, Hyderabad, Hubli, Vijapur and other parts of the country.

The local transport is also well-organized and readily accessible. Traveling locally within Hospet is comfortable, due to the facility of easily available taxis. Normally, taxis charge Rs. 1100 for 100km and Rs.6/km if the travel exceeds 100km. The taxi drivers here are well behaved, helpful and friendly. Renting cars is another good option for local transport. There are many car rental companies in Hampi/Hospet, with SRB Travels (travels@srbempire.com) as a famous one among them. There are also auto rickshaws and city buses for local transport within Hospet. It should not be missed to mention that transportation is reasonably fared here.

Hospet at a Glance

Comments / Discussion Board - About Hospet