History says Hospet used to be a glorious city during the Vijaynagara Empire and much of it's traditions, cultures and art forms have been derived from there. Being the second half of the twin cities of Hampi-Hospet, the city bears identical cultural features to that of the former one. As per the historians, the culture of Hospet is also identical to that of Maharashtra in terms of architecture, music and mannerisms. The confluence of various cultures, ancient art and architecture makes the city an embodiment of beauty. From the UNESCO World Heritage Site Hampi to the culturally grand temples, Hospet has a lot of reasons to be a big cultural attraction. 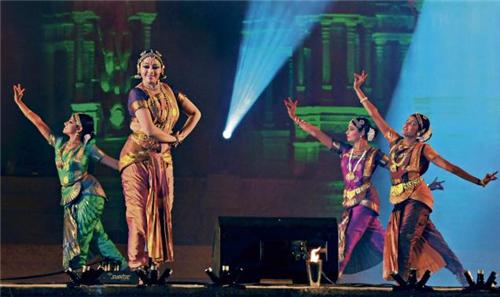 As in other cities of India, people from different linguistic backgrounds live in Hospet. However, Kannada is the official language of Hospet. English is the primary language for education and business.

Similar to most Indian cities, Hospet is a city with people from various religious backgrounds. In the population of Hospet, Hindus contribute to 71%, Muslims to 25%, Christians to 3.3% and other religions to 0.7%.

Costumes are major factors in identifying the culture of a place. The way people dress shows their kind of tradition and style. The traditional costumes of men in Hospet are dhotis, pants and shirts, and that of women are salwars and sarees.

Arts and Crafts in Hospet

Music and Dance Schools in Hospet

The people of Hospet have plenty of inclination towards music and dance. During leisure, they train their children on the same. For this purpose, there are many institutes which teach music or dance or both.

Drama and Theaters in Hospet

Apart from different forms of art and tradition, a majority of the population in Hospet enjoys watching movies as an entertainment. Hence, many movie theaters are seen all over the city.

The following are some of the movie theaters in Hospet:

The people of Hospet like to take part in various art and cultural activities. There are various auditoriums in Hospet which are built to serve the multiple purposes of art and culture.

The following is a famous auditorium in Hospet:

Fairs and Festivals in Hospet

Festivals are great examples of the culture of a place. As a part of their rich culture, the people of Hospet celebrate different festivals in different manners. Some of the most celebrated are;

Also known as Vijaya Utsav, the festival is organized by Karnataka Government to boost performing arts and increase tourism to the city. The Hampi festival is an annual extravaganza of colourful dance and music competitions, puppet shows, fireworks, handicrafts marking the glorious time of Vijayanagar empire. Continue reading...

Purandaradasar Aradhana is celebrated every year in the early months of January and February, marking the birth of classical poet Purandaradasa. Several poetic rehearsals, musical contests and cultural shows are held during the event.

Comments / Discussion Board - Culture of Hospet