There are plenty of monuments with beautiful architecture to be visited in Hospet. However, many people are not aware that some of the most famous historical monuments in the country are present in Hospet. This is because Hospet was an important center of the Vijaynagar empire. There are many ancient monuments here which were originally built around the year 1545 by Sher Shah Suri. The most popular historic place is the Vijaynagar ruins depicting the splendour of the Vijaynagar empire. The historical buildings here were built during different phases of history and have wonderfully withstood damage across centuries to appear with the same magnificence.

History of the Vijaynagar Empire 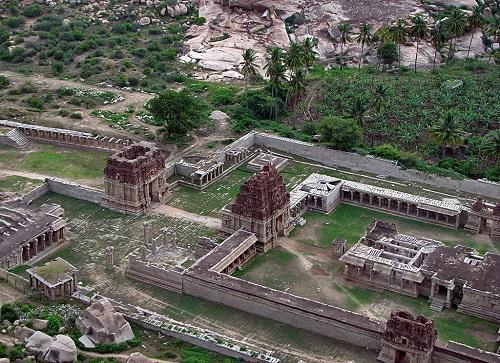 Vijayanagar Ruins is the once magnificient capital city of the historic Vijayanagar empire which now lies in ruins. This splendid empire spread throughout the south part of India. During 1500, Vijaynagar was well known as a large empire with as many as 5,00,000 inhabitants. So, it was popular as the second-largest city in the world next to Peking-Beijing in China. This empire was so large than it was more than twice the size of the largest European city, Paris. These valuable ruins of the famous Vijaynagar empire are now a UNESCO-listed World Heritage Site.

The long forgotten empire of Vijaynagar was so glorious that it ruled over most of south India between the 14th and 16th century. Various travelers and ambassadors from Europe, Iran and China have marvelled at the glory and grandeur of the Vijaynagar reign. Before the Vijaynagar period, the region of Hampi and Tungabhadra River was ruled by the Kadamba, Chalukyas of Badami, Rastrakutas, Chalukyas of Kalyan, Hoysalas of Dorasamudra (Halebidu) and Yadavas of Devgiri (Daulatabad of Aurangabad) in their respective order. Unfortunately, from the year 1294 AD till the year 1318 AD, the Yadava dynasty and most of south India came under the attack of the Delhi Sultan, Allaudin Khilji.

In the year 1325, when Muhammad-bin-Tughluq became the Sultan of Delhi, he undertook several attacks on south India. In 1327, he conquered the Kampili dynasty (present day Hampi), captured a large number of prisoners and took them to Delhi. Among the prisoners, they also captured two brothers Harihara and Bukka, the sons of Sangamas, who both were treasury officers of Kampili. These brothers were converted to the muslim religion and became chief officers in Tughluq's army. As officials, they were sent back to Kampili in 1331 for a campaign under the army of Tughluq.

When Harihara and Bukka reached Kampili, they met Vidyaranya Swami, who was a Shankarachayra of Sankeshvar Pitha who was a brilliant scholar and a writer. Then under the counsel of Vidyaranya Swami, Harihara and Bukka became Hindus again and rebelled against the slavery under Tughlaq. Therefore, they overthrew their slavery to Tughlaq and then these three people began establishing a new dynasty called the Sangama dynasty. In 1336, they chose the region south of the Tungabhadra River which is surrounded by mountains as their capital city and named it Vijaynagar (which means the 'city of victory'). By that time, they had attained most of south India under their reign and came to be known popularly as the Vijaynagar Empire (dynasty). They had regular trading relationships with Persia, China and Europe. There was also an embassy sent to China and a victorious expedition to Ceylon.

The empire was very wealthy and richly laden with arcades and wonderful galleries in the bazaar area. This is where people gathered to buy silk, diamonds, spices, potteries, pearls, and many other precious things. The city was full of picturesque gardens and lakes, and above all, the main grand building was the Royal Palace which was the best example of the amazing stone carvings and architecture of the Vijaynagar empire. Every Vijaynagar ruler contributed in the beauty and richness of the empire. Among them, Krishna Dev Raya was the most revered and great king. He was not only a mighty warrior and a great political administrator, but also a famous scholar and poet.

Paes, a Portuguese was one of the many foreigners who visited Vijaynagar during the reign of Krishna Dev Raya. He was so impressed by the city that he said amazed, “The city is as large as Rome, so rich and beautiful that you would hardly find anywhere another such”.

While Vijaynagar was prospering with wealth and greatness, on another side, a new Muslim empire was growing. Muhammad-bin-Tughluq left his minister Hasan Gangu in charge of the Deccan and south India when he left the Deccan. But Hasan Gangu founded his own dynasty and called it the Bahmani dynasty in Gulbarga. Hasan Gangu was an Afghan Muslim and in his early years at Delhi, he had a Hindu patron named Gangu Brahmin. As a mark of gratitude to him, he named his empire as Bahmani after him and the name Bahmani comes from the word 'Brahmin'. He established his dynasty on the northern boundary of Vijaynagar and as a result, there were frequent clashes between these two Hindu and Muslim empires.

In a very gradual manner, Bahmani Sultanat dynasty was divided into five parts, under Adil Shahi of Bijapur, Nizam Shahi of Ahmadnagar, Kutub Shahi of Goval Konda (Hyderbad), and Bidar Shahi of Bidar who were also known as Deccan Sultans. The founder of Ahamadnagar’s Nizam Shahi dynasty Ahmad Nizam was one of the five. Ahmad Nizam was the son of Nizam-ul-Mulk who was the son of Vijaynagar’s Brahmin accountant, Timappa Bhariu. Ahmad Nizam separated himself from the Bahmani dynasty in 1490, and founded his own dynasty named Nizam Shahi and established its capital as Ahmadnagar.

Though the royal families kept changing often, the Vijaynagar empire remained undivided and victorious over the Deccan Sultans. In 1565, Vijaynagar’s king Ram Raya made plans to interfere in the Deccan Sultan’s affairs and war against it. It was at this same time that the Muslim rulers formed a confederacy against the Vijaynagar empire. This led to one of the biggest wars in the history of India on 26th Jan, 1565.

Thousands of army soldiers, horse men, artillery, and war elephants fought face to face on the Talikota ground. Ram Raya was defeated, captured and beheaded tragically by Nizam who had a blood origin from Vijaynagar. After viewing the tragic sight of their king’s head on the enemy’s spear, the leaderless Vijaynagar army left the ground and that was the beginning of this glorious empire’s end. What we can see in Hampi today are the remaining parts of the destruction of this empire.