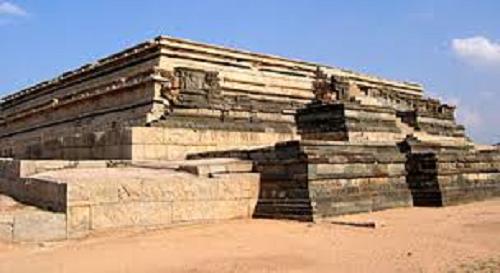 Being the tallest structure in Hampi, the Mahanavami Dibba is the first thing you would notice as soon as you enter the Royal Enclosure. Due to its height, it provides a complete and magnificent view of the town. From a distance, this structure looks ordinary like an elevated square stage, but when you go near, the details are visible. You would see that the whole structure is constructed as a giant square structure consisting of three different layers. This famous structure can be accessed by two big staircases containing carvings of horses, elephants, and other carvings on the front part.

The front side of the staircase is attractively decorated, whereas the twin staircase at the back side is not that decorative. This twin staircase at the back side might have been used as a service staircase during the ceremonial days of ancient times. The carvings in the sidewall panels of the bottom side are the most popular of all the carvings here. This place also contains a photo gallery for the foreign envoys to get a clear view of the pompous annual celebrations held at the capital.

This marvellous structure must have been originally constructed in a massive way with a gorgeously painted and decorated multi-storey pillared hall or pavilion. It is said that King Krishnadevaraya constructed this in commemoration of his victory over Udaygiri (in present Orissa). According to historians, this structure has undergone many enhancements by different kings who were in power subsequently. Proving this theory, the greenish schist stone additions to the front part of the structure are new and can be differentiated from the rest.

From this structure, the king used to watch the army march-pasts, shows of the royal animals, war games, musical performances and aquatic sports. Most importantly, the significant nine day-nine night state festival, Navarathri was celebrated pompously in this pavilion. These Navarathri celebrations were held annually and the governors of the king's various provinces visited the capital at that time to pledge their devotion and loyalty to the king’s reign. So, it was an event in which the king took pride in showcasing his imperial power and glory in a grand manner.

During the Navaratri festive occasion, this Dibba is where the kings also reviewed their armies and inspected their readiness for battle. There is a ground opposite to the Mahanavami Dibba, where religious functions associated with the festivities were conducted. In this ground, the state horses, elephants and other royal paraphernalia were consecrated for worship by the king, priests and the royal maids. During special occasions, the place was also filled with many decorated platforms and pavilions erected by the chiefs and captains. There is also a large 12.5 meter long stone trough cut out of a single block of granite near this place.

Remains of the Mahanavami Dibba

The beautiful superstructures of the Mahanavami Dibba and the other associated platforms find their place in historical records, but now, there is no symptom of existence for these. The present remains only consist of a huge square granite base in three diminishing tiers, the topmost of 24 metre squares and the lowest of 40 metre squares. The structure is north-facing and the carvings are smoothly finished due to the fine nature of the stone used. The walls of the three tiers are beautifully decorated with rows of elegant carvings of horizontal friezes of horses, warriors, elephants, dancers, musicians, and so on. Some sections of the western side are covered with dark green chlorite consisting of sculptures arranged one on top of the other granite frieze.

Replication of the Mahanavami Dibba

You can view a near replication and continuation of this structure at the Mysore palace during the Dussera season, since Mysore was the later day capital of the state. This huge stone basement is also called as Dasara Dibba and the Throne platform and Domingo Paes named it the House of Victory. The Mahanavami Dibba played an important part during the nine-day Navaratri festival celebrations.

Mahanavami Dibba in the Zenana Enclosure

This unique and famous monument is one of the highest spots inside the walled Zenana Enclosure of Hampi. The platform rises in three ascending diminishing square tiers, each added at a different time. There are steps leading up to the platform from the south and west, but there is no structure on top except for the recently discovered stone footings of a long disappeared wooden pavilion.

The height of the Mahanavami Dibba is 12 metres till the topmost platform and there is a tiny chamber projecting from the platform on the east side. It was from the west side of the Dibba that the king ascended the platform during the Dasara festive celebrations. You can access the chamber by two flights of steps on the north and south located on the floor of the Dibba. The small chamber on the east side has walls containing many panels and friezes with figures of animals and clowns. The figure of a group of people with plaited hair, conical caps and swords probably denotes the representatives of a Chinese embassy sent to the Vijayanagara empire during Krisna Deva Raya's rule.

Some carvings in the Dibba depict other foreign members who visited, such as Portuguese merchants, Arab horse dealers and also exotic animals. It is noteworthy that the attire, beards and upward-turned moustaches of the foreigners were carefully observed and replicated by the skillful artists in the carvings. Also, the various movements and body postures of the Europeans have been portrayed with exact detail in the carvings.

There are relics on the sides of the Dibba portraying the great ancient processions that took place. The king’s armies are depicted in these relics, as well as the hunters and dancers of ancient times. The Mahanavami Dibba is a marvellous portrayal of the lifestyle, culture and festivities of the time it was constructed. In these relics, there are also many details of ancient local costumes and musical instruments. Unlike a majority of ancient art focussing on the past, the focus of this Dibba is on the present moment of life in the world. So, the carvings are full of life, expression and vigour with a zeal and immediacy to them.

The admission to the Dibba is free and the visiting hours are from 7am to 7pm from Monday-Sunday. Usually, the mornings or evenings are preferable for visit, as this is a huge enclosure with absolutely no shades at all.


Explore more about Tourism in Hospet

Are you a Business Owner?

Add the products or services you offer