One Day Trip From Hospet

Hospet is distictively famous as a tourist attraction because of its proximity to Hampi, a world Heritage site. You can visit Hampi, which has the most magnificent ruins of the Vijaynagar empire, and which is just a one day trip from Hospet (12km). From this city, you may choose to go for daylong sight seeing tours of Hampi and the Tungabhadra Dam arranged by the Karnataka State Tourism Development Corporation.

There are also regular buses between Hospet and the Tungabhadra, which are at a distance of fifteen kilometers from one another. There are also other prominent places of tourist attraction close to Hospet. Some of these are the Lotus Mahal, Virupaksha Temple, Vittala Temple, The Archaeological Museum, Hazara Rama Temple, Ragunath Temple and Queen’s Bath. Therefore, Hospet serves as the gateway to the famous and historically rich places of India, especially of the Vijaynagar period.

One day Tourist Attractions From Hospet

The following are the tourist attractions which are close to Hospet:

Chitradurga The ancient hill and fort town. This town is located on the way to Hospet from Bangalore. Chitradurga, also called Kallina Kote or the Place of Stones is a picturesque destination full of rocky hills and beautiful valleys. The huge towering boulders here show nature in all its grandeur. It is believed that Tipu Sultan, the Palegars and Hyder Ali built the famous fort in Chitradurga.

The fort is well known for its military architecture and is surrounded by seven walls. There are nineteen gateways to the fort and many ancient temples of great architecture within the fort. The top of this hill fort contains the cave shrine of Hidimbeshwara and the Sampige Siddeshwara temple. The most ancient of these is the Hidimbeshwara temple. The biggest temple in Chitradurga is the Uchchangtamma temple, which is a two-storeyed building. It takes pride in its unique swing arch and a tall and beautiful lamp-pillar. 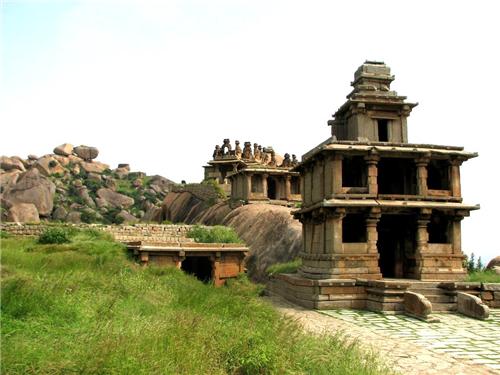 Harihar A historical and religious town. This religious town is situated on the banks of the Tungabhadra River. The sculptures on the left side of the temple are very famous. The right side of the temple is popular for being built in the Hoysala style dating back to the year 1223. The Archaeological Museum here contains the remnants of the historic wars, ancient manuscripts and coins. One of the highest points in this area is Jogimatti and draws huge crowds because of its wondrous view of the Himavat Kedaya waterfall. This waterfall is a breath-taking picnic spot including the cool surroundings. Other places in the town that are thronged by tourists are the amazing Murugharajendra Matha and the Ankli Matha.

Tungabhadra Dam The largest multi-purpose dam in the town. The marvellous Japanese gardens at the base of the dam and the sweet taste of the waters of the Tungabhadra river draw tourists here. This enormous dam across the Tungabhadra River is 590m long and 49m high with a terrific storage capacity. The dam also boasts in having a beautiful garden and park. 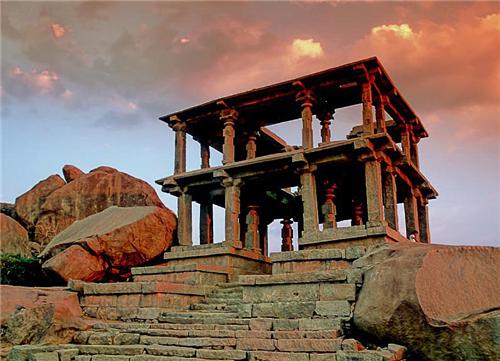 Hampi The magnificient ruins of the medieval Vijayanagar Empire. Hampi, a World Heritage Center, retains the old glory of the Vijaynagar empire in its ruined form. Due to the significance of this spot, the government has undertaken restoration, excavation and protection of these important ruins. You must visit the King's Balance at Hampi, which is a symbol of an important ancient tradition carried out. The kings were weighed against grain, gold or money which was then distributed to the poor.

Queen's Bath The majestic swimming pool used for royal ladies. This amazing pool is fifty feet long and six feet deep. There are gorgeous fountains here in the shape of the lotus flower which used to sprinkle perfumed water for the ladies. This spectacular structure with its arched corridors and projecting balconies is amazing to be viewed.

Lotus Mahal Ancient mahal of architectural splendour. This mahal is known for the beautiful carving of a lotus bud on its dome. According to history, this Mahal was the socializing area for the royal women. This very rare structure is situated near the Hazara Ram temple and was built using lime mortar and brick. The beautiful decorational carvings here are a mixture of Hindu and Muslim styles.

Archaeological Museum Ancient museum with collections of archaeologically significant artefacts. This big museum is in the small hamlet of Kamalapuram in Bellary and displays numerous ancient items. There are also huge sculptures and small-scale models of the city. The first gallery displays collection of sculptures of the Saiva sect. In the second gallery, arms, armoury, copper plate grants, brass plates and religious objects are displayed. The third gallery displays ancient gold and copper currency coins of various denominations.

Raghunath Temple A major religious and historic sightseeing location. The shrine contains sulptures of architectural richness carved on the boulder. The temple is built within the boulder and its whitewashed pillars at the centre are the highlight. In front of the temple area, there is also a colonnade standing along the enclosure. 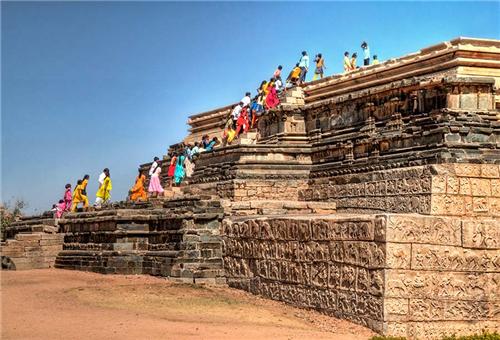 Mahanavami Dibba Tallest structure in Hampi. This square structure can be reached by two big staircases with carvings of elephants, horses and other carvings on the front. The front portion of the staircase is decorated beautifully whereas the back portion has a twin staircase that is not as decorative. The top provides a full and magnificient view of the town. It is said that King Krishnadevaraya built this after his victory in Udayagiri (presently a locality in Orissa).

Matanga Hill Renowned for its association with the epic Ramayana. Today, its a popular tourist destination mainly because of its temples and trekking tracks. People flock here for the amazing view of the sunrise and sunset. For trekking fans, there are many trekking tracks around this hill. The most popular track is the north one starting from Hampi bazaar to Achyuta Raya Temple. It is exciting that the entry to the Matanga Hill is free and easily accessible from all areas of Hampi.

Comments / Discussion Board - One Day Trip From Hospet