Situated just 12 kilometres from Hampi, Hospet is a major tourist attraction in India. Hospet is also a great spot to plan your excursions because of its proximity to the World Heritage Site. Moreover, the ancient tourist places Chitradurga and Harihar too are situated at a shorter distance from Hospet. Some of the cultural and historically rich ruins are still present in Hospet too as it was once an important seat of the Vijaynagar empire. As per the historians the Portuguese traveler Paes praised the Vijaynagar empire and compared it with Rome. People from across the world flock to Hospet to visit the ruins depicting splendid art and architecture.

Apart from Hampi, Hospet also has other interesting spots for tourists. The Lotus Mahal, the Tungabhadra Dam, Chitradurga, Harihar, Elephant Stables, the Royal Palace and the Fish Aquarium are some of the famous visitor attractions. There is also plenty of wildlife to be observed in Hospet. Chakra Vana, Nandanavana park and Shri Ramulu Park are some the greatest places to spot wildlife. Daroji Bear Sanctuary near Bellary is considered by tourists as the best wildlife sanctuary near Hospet. Some of the must visited tourist places have been mentioned below;

Tourist Places to See in Hospet

This small city of Hospet is a wonderful place with many tourist spots. Some of the best examples of ancient and magnificent architecture can be experienced here. The following are some of the famous tourist spots in the city:

Tungabhadra Dam built by Dr. Thirumalai Iyengar, an engineer from Chennai is one of the major attractions of Hospet. It is built across the river Tungabhadra and is one of the biggest multi purpose dams in Karnataka. The Tungabhadra is the main tributary of the Krishna River in south India. The two rivers, the Tunga and the Bhadra, join together to form the Tungabhadra river which begins in the Western Ghats.

This reservoir covers a huge area of 400 sq.km and has a capacity of storage capacity of 135 thousand million cubic feet. It has 33 gates from which water gushes out, making it an awe-inspiring site. The dam is used for several purposes like providing electricity, prevent floods and also to irrigate the land. The canals of this dam have the capacity to generate 27 mega watts of electricity and irrigate thousands of acres of land. This is a great tourist spot with its beautiful gardens, aquarium, children's parks, musical fountains and the vast and lovely garden adds to the beautiful view of the dam. 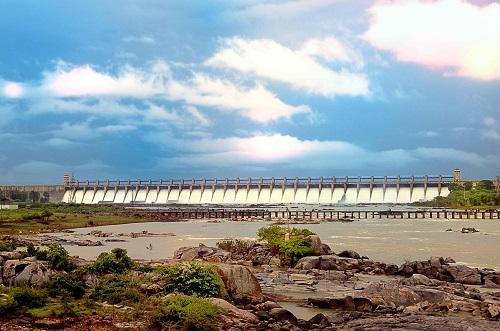 Chitradurga is an ancient town situated close to Hospet and is a popular tourist attraction. The town is situated in the Vedavati River valley and the Tungabhadra River runs to it's northwest. There are many famous legends that Chitradurga has been around since the days of Ramayana and Mahabharata. The major attraction of of the place is the Chitradurga Fort or Kallina Kote also known as the 'Palace of Stones'.

The name of the fort 'Chitrakaldurga' means 'Picturesque Fort' in Kannada. The fort consists of seven big walls with gateways each, making it a formidable one. The entrance paths are deliberately made narrow, as resistance against battering rams and elephant attacks. The fort was first breached by Hyder Ali in the year 1799. There are nineteen temples in the fort and the most popular one is the Hidimbeshwara temple. There are also 19 gateways, 28 visible gates, 35 secret gates, 4 invisible entrances and 50 warehouses along with many other areas of the fort. It is said that the place never lacked water because of its interconnecting tanks which were also used to harvest rain water. 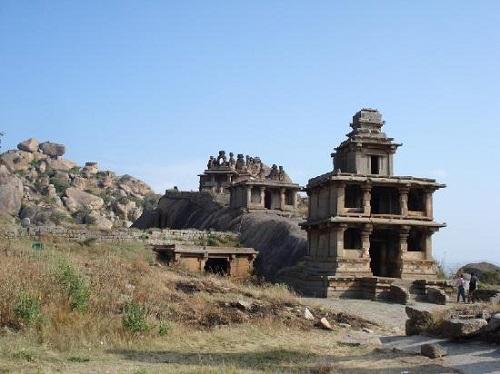 Harihar town is a tourist attraction famous for the temple there built in the year 1223. This popular Harihar town is situated on the banks of the Tungabhadra River. Apart from the temple, another main attraction of the town is an archaeological museum. The museum displays remnants of wars that took place there, ancient coins and also manuscripts. Himavat Kedaya waterfall in the town is a popular picnic spot among the people of Hospet. This waterfall is worthy to be visited for its amazing scenery and pleasant atmosphere.

Anantasayanagudi village was built by Krishnadeva Raya in memory of his deceased son, according to historians. It is said that he also built a temple there and alloted certain villages for its maintenance. He also ordained priests to take care of the temple. The temple is built with splendid architecture. It consists of a mahamandapa, sabhamandapa and a rectangular garbhagriha.

Queen's Bath is a perfect example of the ancient artisans' creativity and amazing craftsmanship. This ancient bath is constructed over a large area of fifteen meters. It has been built beautifully consisting of a gallery, verandas, hanging Rajasthani balconies and steps leading to the water body. Hence the bath is also called the Stepped Bath. As per the historians, there was once a waterfall in the bath which poured perfumed cool water through underground drains. However, currently, only some of these structures are in a mediocre condition, while others have been totally ruined. 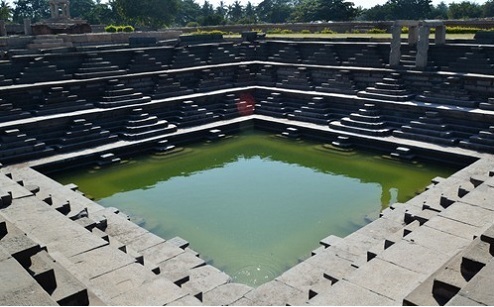 Lotus Mahal, as the name implies, is known for a carving of a lotus bud on its dome. Therefore, it looks like a lotus flower from the top. Historians have discovered that this Mahal was the air-cooled socializing area for the royal family's women. This very rare secular two-storey structure is located near the Hazara Ram temple. This structure was built using lime mortar and brick and has beautiful arc ways set in geometric regularity. The decoration carvings are a beautiful mixture of Hindu and Muslim styles of architecture. The ornamentation is Hindu in style, whereas the pillars and arches are Islamic in style. 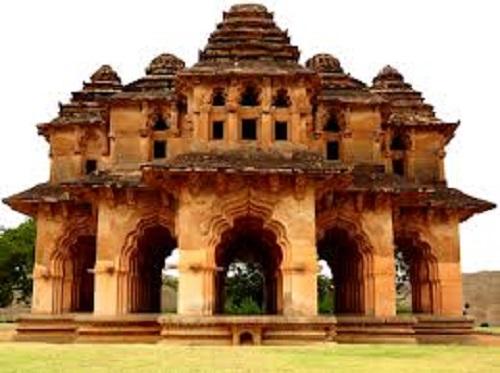 The Royal Palace, one of the greatest attractions is situated at the entrance of Hampi. It is said that the royal family of the Vijayanagara Empire lived here. The palace is well known for its lovely architecture and is located towards the south of Kamalapuram village.

King’s Balance is an ancient balance which was used by the kings to weigh gold and other goods to be given to the Brahmins. The carvings and the sheer size of this balance is a thing to see.

Elephant Stables are a great example of the Hindu-Muslim style of architecture. It is said that these stables were home to about eleven elephants, each in separate compartments. 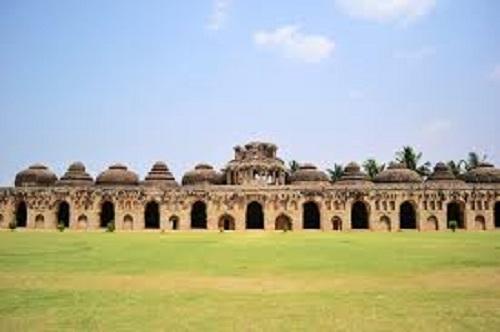 Sasive Kalu is located on the southern foothill of the Hemakuta Hill. A monolithic statue present here is carved out of a huge boulder and measures about 2.4 meters (8 feet). There is also an open pavilion built around the statue. According to historical inscriptions discovered near this place, this pavilion was built by a trader from Chandragiri (Present Andhra Pradesh) in 1506 AD, in memory of Narasimha II, a king of Vijayanagar.

Sister Stones are two giant boulders leaning against each other and forming an archway. The main road from the Underground Temple near Hampi bus station almost passes under these stones. A local folklore talks about two sisters who were cursed for mocking the place and hence the name. In Kannada, the name is Akka Tangi Gundu meaning ‘sister stones’. 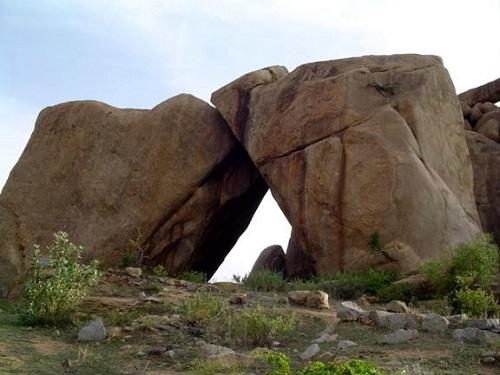 Museum and Art Gallery is a big museum run by the Archaeological Survey of India. It has a very large and great collection of sculptures belonging to the Vijayanagar Empire. It is situated at Kamalapuram.

M.J. Nagar Park in Hospet is another well known park in Hospet. It is located at 5th cross, Mritunjaynagar.