The major tourist attraction, Zenana Enclosure is said to have been a secluded area especially meant for the royal women in ancient days. This walled harem is made up of many interesting structures, the main attraction being the Lotus Mahal located at the southeast extreme corner. This pastel colored Lotus Mahal is the first thing that would capture your attention when you enter inside the Zenana Enclosure. As the name suggests, the Lotus Mahal's dome has its top shaped like a lotus flower. The entire compound is huge and a long mud road passes through the center of the compound. This two - storeyed arched Mahal was the private enclosure reserved for the royal women in historic days. 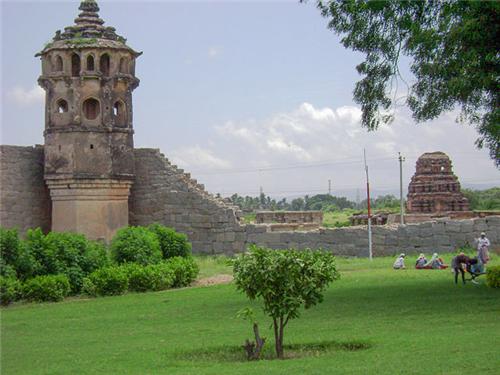 There is another group of archaeologists who believe that the Lotus Mahal could not have been used as the royal women’s place. This is because the structures close to this building such as the elephant stables and the guards' quarters are not apt to be located near a harem. They believe the Lotus Mahal must have been a council room for the chief commanders and not a harem. The rectangular enclosed building at the northwest corner is believed to have been the armory or treasury and not the quarters of the eunuch guards. To sum up their theory, they believed that the palace belonged to the king and not to the queen or concubines. They also believed that the names Zenana Enclosure and Lotus Mahal were given arbitrarily and not based on any assumptions.

At the center of the Zenana Enclosure, on the left side of the path, is the Queen’s Palace (only the basement of the palace is visible). This palace basement measures about 46 x 29 meters and is the largest palace basement excavated till now from the Hampi ruins. The three-tiered elaborate basement structure clearly shows its importance as a palace.

On comparing with the stone basement of other structures, this mega basement structure was made of less durable materials such as wood. Opposite to the basement of the palace, on the eastern side, across the middle path, lie the ruins of a water pavilion. This low lying structure is actually a decorated platform at the center of a shallow pool and it is the first thing you would notice when you enter inside the enclosure. The palace, along with the other royal structures, could have been destroyed by rival invasion. At the east side, there is an rectangular deep tank (now empty), which might have been used as a water source for the palace.

It is interesting that the royal Treasury building too was present within this enclosure. There is an almost featureless rectangular structure at the northwest corner of the enclosure. This area, being the ladies' pavilion, is said to have been guarded by eunuch solders. So, some historians believe that this might have been the eunuch guards' quarters. There is only a simple entry for the palace on the eastern side and a corridor running all around inside with regularly spaced arches. However, there are absolutely no windows in this building to have allowed ventilation and light inside. Therefore, most historians are of the view that this must have been a kind of storage area rather than a living space. 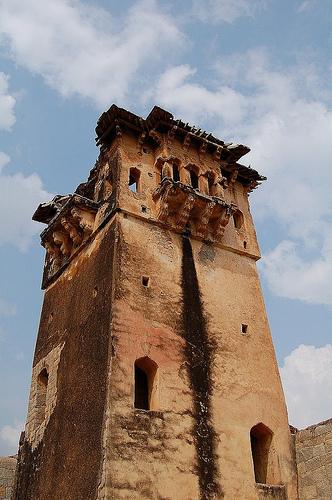 There are three watchtowers at the corners of the Zenana Enclosure. You can view two-storeyed towers near the southeast, northeast and northwest corners. These towers have been built in the splendid mixed Indo-Islamic style of architecture. You can climb to the top floor of these towers (the guards may not allow this if it is very crowded). From this view point, you can survey the whole area and also the Elephant stables behind the Enclosure.

Inside the Zenana enclosure, you can find the remains of a number of unnamed structures and walls of separation. The entire enclosure is surrounded by broad and tall walls built using cut stones arranged in interesting and beautiful patterns. You must notice the style in which the wall has been constructed. The structure has been designed strategically to give the royal women privacy while watching the royal ceremonial functions or the march past.

The Zenana enclosure, a once luxurious 'Antahpura', now contains only the remnants of a massive stone basement of the Queen's palace and the ornamented pavilion called the 'Lotus-Mahal'. Some of the other significant architectural remains of Hampi are the Dhananayaka's enclosure (the royal treasury), the corner towers of arresting elevation, the elephant stables, the Mahanavami Dibba with beautifully sculptured panels, the row of pillared Mandapas and various tanks and ponds.

Recent archaeological excavations at the Hampi site have brought out evidence of a large number of palatial complexes and multi-platform basements. Also, many interesting antique objects such as stone images, stucco figures and beautiful terra cotta objects that once decorated the palaces of Hampi have been unearthed. Apart from that several coins made of gold and copper, household utensils, a square stepped-tank (Sarovar) of Mahanavami Dibba, a large number of ceramics including porcelain and inscribed 2nd and 3rd century Buddhist sculptures have been discovered.

It would be the best plan for you to visit this place as soon as it opens in the morning. This is the only time of the day when you can enjoy seeing the place undisturbed and photograph peacefully before a crowd slowly starts building up. It would be a good idea if you reserve atleast one hour or more to roam around and explore this area. Most probably, your next destination would be the Elephant Stables at the east, the Jain Temples and the Hazara Rama Temple at the southwest or the Ranga Temple and Yellamma Temple at the south.

The opening hours of the Zenana Enclosure are from 8.30am in the morning to 5.30pm in the evening. This Enclosure is one of the few tourist spots in Hampi where you have to pay for the entry ticket. You can find the ticket counter outside the place and located to the west of the primary entrance. The entrance fee is USD 5 and equivalent for foreign tourists and for Indians, the government offers a concession and charges only Rs.10. The admission is free, however, for children who are below the age of 15. The usage of still camera is free of cost, whereas the fee for the usage of video camera is Rs.25. Usage of tripods is forbidden inside the Enclosure.

Running through the center of this enclosure are paths to other tourist spots like the Elephant Stables, Guard’s Quarters and some other temples. Currently, the entire area is converted into a beautiful open garden with sprawling lawns. People are often seen taking naps under the garden trees in the afternoon times. When you roam around in this spread-out area, you will definitely need to reassure your location and check the next direction now and then. To help you in this purpose, a good site map is also available in this area. Preserve the entrance ticket as it is also valid for the same day entry into the Vittala Temple and the nearby Elephant Stables.